A wide sandy beach framed by dunes and pine trees out of sight, bathed by cold and calm waters, that were a well kept secret. Then came the towers of Troia, which increased  the beach occupation and after that were the tourist villages and this beach became a fashion spot for vacations. 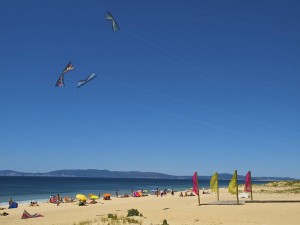 Comporta has become the seaside chapel of the “beautiful people”, waging a consistent transfiguration in terms of infrastructure. The snapshot refinement wave brought, however, a sea of people and especially of cars incompatible with the status of the Sado Estuary Nature Reserve. It became famous, but with  “in-behavioral” peaks in the high season.

The alternative tribe tends to go  further south to the Carvalhal Beach.

Comporta is about 120 kms from Lisbon, route which takes about an hour and a half to go. Most can be made on the IP1 with output in Alcacer do Sal, then deflected right into N253. The detour to the beach is the first left after the Rice Museum. The alternative is to take the ferry in Setubal and then Trojan south on N253.In the Santiago do Cacém road (N261) there is a deviation to the Carvalhal, which is about four kilometers ahead.