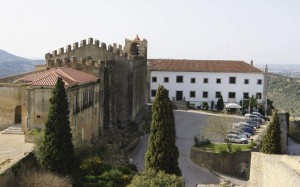 Inside the walled area of the castle of Palmela, donated by D. Sancho I in the 12th Century to the Military Order of Santiago, were carried out major works  in the 15th Century, particularly in the western sector, where a church was built and the convent of Santiago was born. Here  it would be installed the headquarters of the Military Order.

Fallen into ruins after the extinction of the religious orders in 1834, was the whole place classified as a national monument in 1910. (DG 136, of June 23, 1910) In 1940 the DGEMN proceeded to partial restoration of the Castle.

In 1969 is approved the change of  the convent into the famous  Inn, a project by the architect  Luis dos Santos Castro Lobo, which was inaugurated in 1979.

After archaeological explorations in the eastern area some spaces were turned into museum rooms overlooking the excavated areas.

The cloisters of the former convent, with galleries transformed into recreational areas are some of the beautiful characteristics of this Inn The restaurant is located in the old refectory of the friars, with thick walls and the original pulpit where religious readings were made during meals.

From the 23 rooms and 5 suites, spread over two floors, one can choose to see the sea, the village or the Castle, depending on weather conditions and orientation. Of sober decoration also have these thick walls of 1.40 meters.